I was born and raised in Tulsa, Oklahoma, but I have now spent almost as much of my life in New York as I did in Oklahoma. I lived in New York City for ten years, teaching elementary school and learning about farming from afar. In 2006, I moved up to Tivoli to work at Hearty Roots Community Farm, a community supported vegetable farm. After one season I was hooked. In my second season there I met my partner, Owen. Together we started Awesome Farm, a pasture-based livestock farm that was initially in Red Hook and later in Claverack (Columbia County). We spent four years raising chickens, grass-fed beef and lamb. While running Awesome Farm, I continued to work at Hearty Roots and somehow managed to have a baby, Sparrow,  in the winter of 2010. In 2012, my family moved to Kingston and I have been involved in urban agriculture ever since.  Initially I ran the South Pine Street City Farm and in 2013 launched the Kingston YMCA Farm Project.  I am so excited to work with the wonderful youth in the Dig Kids program and to spread my love of growing food to the next generation. 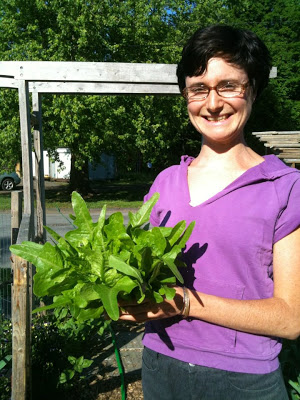